By Lucy Sherriff, BBC News
NOTE: GOT A CALL FROM CHERYL RE THIS TODAY AND WE TALKED ABOUT HOW SHE CAN CONTACT THE AUTHOR TO CORRECT ANY FACTUAL  INACCURACIES BY REQUESTING AN INTERVIEW. I ALSO OFFERED CHERYL THE OPPORTUNITY TO WRITE HER OWN REBUTTAL TO THIS STORY WHICH I WOULD THEN PUBLISH.

For several consecutive years, fires have devastated the Californian coast, destroying lives, wildlife and homes. The fire service is under increasing pressure with fewer resources.
One former firefighter has decided to do something about it, and is setting up his own fire crew.
Eric Beninger, who lives in Palo Colorado Canyon in Big Sur, saw many of his neighbours’ homes destroyed by the 2016 Soberanes fire, one of the most expensive wildfires in US history.
The 2017 wildfire season was one of the worst in the state’s history, with more than 9,000 fires burning 1.2 million acres (500,000 hectares). Last year, the Paradise fire alone killed 74 people.
After witnessing the devastation of his own community, Mr Beninger decided to recruit his neighbours and train up an independent fire team to be on standby for future fires.

“When the fire crews finally arrived, they had to decide which houses to just let burn,” he says. “Everything was on fire.”
The Soberanes fire, which burnt for three months, destroyed 57 homes and cost around $260m (£200m) to suppress. Of the 27 homes along Mr Beninger’s road, only eight survived.
The US Forest Service’s response was subsequently criticised for its handling of the fire. Even help from the region’s volunteer service – Big Sur Fire Brigade – wasn’t enough to stop the flames.
“After the fire started, the neighbours mostly fled,” Mr Beninger recalled. “A few of us stayed behind to protect our homes, because we knew we weren’t going to get help. We risked our lives to be here, not knowing what the fire would do.
“Where we live is difficult to reach, it’s secluded. And we were forgotten about.”

Mr Beninger is a carpenter, but used to be a firefighter with the US Forest Service in one of the hotshot crews – teams known as America’s “elite” firefighters due to the danger of their work.
He and two friends helped save three homes from burning – by using water bottles from the Red Cross.
“We had all these little tiny water bottles with Red Cross stickers on. And we were going to houses and putting out fires that threatened the whole home. We’d unscrew the bottle cap a little bit and squeeze them so the water squirted out, rather than just pouring.”
“We had a shovel – no chainsaws though, mine had burnt in the fire. We were just this tiny makeshift fire brigade in a pick-up truck with some water bottles.”
That’s where the idea began, said Mr Beninger, who soon after heard about a small fire truck for sale in nearby Carmel Valley. The owner gave it to him for half the price, and now it’s up to him to restore it and build a team.
The fire truck is built around a 1973 Dodge Power Wagon, and has a four wheel drive, meaning it can access the canyon’s almost-impassable dirt roads. 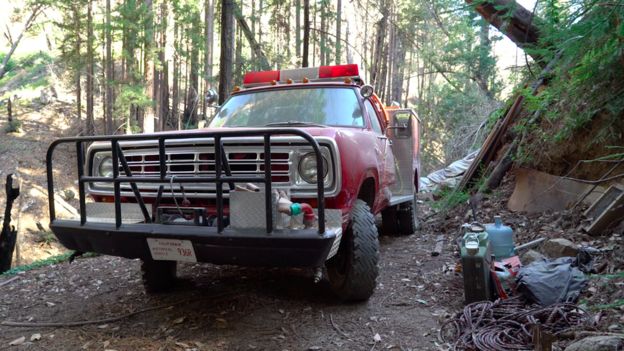 “At the moment we don’t have a big crew, but we’re speaking with another six neighbours and we’re going to do what we can. We’re going to give everybody basic fire training.”
Mr Beninger is planning barbecues, calendars – “men and women” he noted – and “whatever it takes” to drum up the $10,000 needed to get started.
“The best part is making our community tighter. Having the truck is one thing, but knowing how to use it and bringing everybody closer is more important. I don’t know if we’re going to be able to save any homes, but we’re going to try.”
Mr Beninger predicts the fire is “definitely” going to return.

“There are still materials here to burn, and they’re dry, and there’s more airflow now between everything, so it could be as bad, or even worse, a fire than we’ve had previously.”
CalFire and the US Forest Service are tasked with fighting fires in the region, but thanks to government funding cuts and an increase in demand, resources are stretched.

© Kate Woods Novoa and bigsurkate, 2008-2021. Unauthorized use and/or duplication of this material without express and written permission from this blog’s author and/or owner is strictly prohibited. Excerpts and links may be used, provided that full and clear credit is given to Kate Woods Novoa or bigsurkate with appropriate and specific direction to the original content.